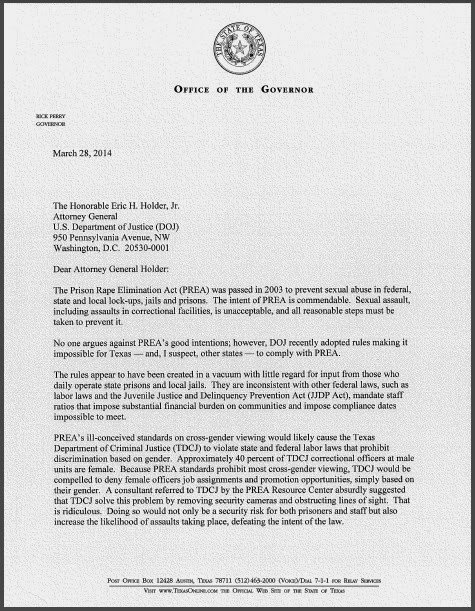 
The 2003 PREA law  passed unanimously by Congress and signed into Federal law by then President George W Bush, set guidelines for the US Justice Department to implement standards and criteria to reduce sexual assault in prisons and jails.

In Perry's Letter he states: "No one argues against PREA's good intentions; however, DOJ recently adopted rules making it impossible for Texas - and, I suspect, other states - to comply with PREA. The rules appear to have been created in a vacuum with little regard for input from those who daily operæé søte prisons and local jails, They are inconsistent with other federal laws, such labor laws and the Juvenile Justiçe and Delinquency Prevention Act (JJDP Act), mandate staff ratios that impose substantial financial burden on communities and impose compliance dates impossible to meet."

Rick Perry's decision to not certify Texas prisons in compliance with PREA standards now means the Texas Department of Criminal Justice (TDCJ) may face a loss of Federal PREA funding.  In addition to loss of Federal funding, this latest decision will open Texas up to Federal court litigation and increased liability for the state and correctional staff.

Warning Given to States
In a September 4, 2013 interview published in US News & World Report, Rep. Bobby Scott, D-Va, who help author the PREA legislation., suggested that "sometimes you can enforce it with lawsuits." Because of the 1994 Supreme Court decision in Farmer v. Brennan, he said, prison officials only need to display deliberate indifference to be liable.  "Damages could reach billions in some states," he said. Judge Reggie Walton, a Federal Judge appointed under President George W Bush, who also heads the PREA Commission agreed. "You're going to see large money damages being awarded" against non-compliant prisons, he said. "They could be astronomical. ... If [a prisoner is raped] multiple times, it could be million-dollar verdicts."
Lame Duck
While Rick Perry may be seen as saving taxpayers billions of dollars during his term, this latest move may cost the state billions more in the future.  The state's budget appears to have been balanced on future taxpayers backs by continuing to pass the liability on to the next politician.

Texas prison remains understaffed and continue to be even more dangerous since the Texas Department of Criminal Justice's Safe Prison Program began.  Understaffing and inexperience plague the agency.  This last session Texas politicians continued to ignore the staffing issues and only gave Correctional staff a 5% raise spread out over a 2 year period, while other state law enforcement enjoyed a 20% raise.

While most correctional officials are over burdened by the new PREA standards, Governor Perry's letter is not the solution for implementing PREA standards.  The PREA Commission is headed by a Federal Judge appointed by former President George W Bush.  This law was passed and signed into law in 2003.  Governor Perry had over 10 years to send this letter prior to the standards being set.  Like many things in Texas Government, this demonstrates the reactive, instead of proactive leadership that has molded the Texas prison system into what it is today.