GENEVA -  The United Nations 53rd Committee Against Torture (CAT) concluded their review of human rights complaints from their session that began on November 3rd and ended on November 28th.  During their session the committee heard evidence of several deaths occurring in Texas prisons, including a report from the University of Texas Law School's Human Rights Clinic.

In their report the UN Committee cited the following concerns:


The Committee urges the State party to investigate promptly, thoroughly and impartially all deaths of detainees, assessing the health care received by inmates as well as any possible liability of prison personnel, and provide, where appropriate, adequate compensation to the families of the victims.

The State party should adopt urgent measures to remedy any deficiencies concerning the temperature, insufficient ventilation and humidity levels in prison cells, including death row facilities.

At this time several lawsuits are currently awaiting trial, including a heat litigation injunction case which is under appeal in the 5th Circuit Court of Appeals in New Orleans which may determine the outcome of other heat cases seeking injunctive relief.
The UN Committee expressed further concern over states not certifying as being compliant with the Prison Rape Elimination Act (PREA).  In their report the UN Panel stated:

The Committee is seriously concerned at the widespread prevalence of sexual violence, including rape, in prisons, jails and other places of detention by staff and by other inmates. It also notes with concern the disproportionally high rates of sexual violence faced by children in adult facilities, as well as the higher rates of sexual victimization reported by inmates with a history of mental health problems and LGBTI individuals. While welcoming the promulgation in 2012 of the National Standards to Prevent, Detect, and Respond to Prison Rape under the Prison Rape Elimination Act (PREA), the Committee is concerned by reports that their implementation at the state level continues to be a substantial challenge.  In this context, the Committee notes with concern that six states have not certified that they are in full compliance with PREA standards, and several agencies operating federal confinement facilities are still in the process of issuing their own PREA regulations.

The panel cited the following recommendations be implemented:


The State party to increase its efforts to prevent and combat violence in prisons and places of detention, including sexual violence by law enforcement and penitentiary personnel and by other inmates. In particular, the State party should:

(a) Ensure that PREA standards or similar standards are adopted and implemented by all states, and that all federal agencies and departments operating confinement facilities propose and publish regulations that apply PREA standards to all detention facilities under their jurisdiction;

(b) Promote effective and independent mechanisms for receiving and handling complaints of prison violence, including sexual violence;

(c) Ensure that any and all reports of prison violence, including sexual violence, are investigated promptly and impartially and that the alleged perpetrators are prosecuted;

(g) Develop strategies for reducing violence among inmates. Monitor and document incidents of violence in prisons with a view to revealing the root causes and designing appropriate prevention strategies;

(j) Revise the practice of shackling of incarcerated pregnant women, bearing in mind that the regime of the prison shall be flexible enough to respond to the needs of pregnant women, nursing mothers and women with children (see the United Nations Rules for the Treatment of Women Prisoners and Non-custodial Measures for Women Offenders (the Bangkok Rules, as adopted by the General Assembly in its resolution 65/229 of 21 December 2010, Rule 42.2).

Only 6 states have refused to comply to certifying as PREA compliant, these states are Texas, Arizona, Florida, Idaho, Indiana, and Utah.  Their failure to certify has brought on international pressures and scrutiny.

The United Nations expressed concerns about the Prison Litigation Reform Act (PLRA) impacting a prisoners right to bring lawsuits.  The Federal tort reform law was passed in 1997 after several states, including Texas lobbied for the bill.

See Report by the United Nations Committee Against Torture

Corruption Beyond Correcting - The Fall of the American Correctional Association President 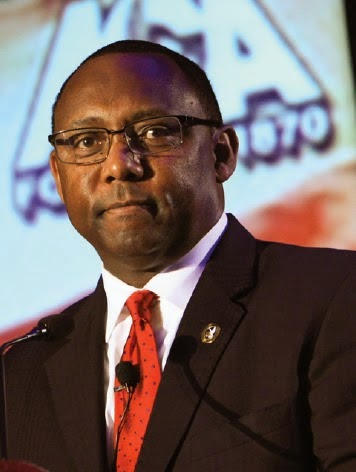 (Photo Courtesy of the Mississippi Department of Corrections)

Jackson, MS - This summer in a quiet room of a Federal court house in Jackson, Mississippi a grand jury deliberated on a 49 count indictment of public corruption, bribery, money laundering, and conspiracy that may bring the heart of the private prison industrial complex down.


Under grand jury investigation were Christopher Epps, a national director for the Correctional Peace Officers Foundation (CPOF), president of the American Correctional Association (ACA), and the longest serving commissioner of the Mississippi Department of Corrections (MDOC).  Another co-conspirator Cecil McCrory, a former Mississippi state representative, former justice board judge, and Rankin County School Board chairman was also being investigated.  McCrory worked as a paid consultant for many well known private prison groups such as The Geo Group, Cornell Corrections Inc, Management & Training Corporation (MTC), and Wexford Health Services.


Christopher Epps and Cecil McCrory were arraigned on November 6th before U.S. Magistrate Judge F. Keith Ball on a 49-count indictment returned by a federal grand jury in August. Christopher Epps was accused of receiving almost a million dollars in kickbacks from Cecil McCrory since 2007 by awarding almost a billion dollars worth of no bid contracts to McCrory and his private prison corporation clients.   McCrory is alleged to have made payments on Epps home, gave Epps numerous cashier checks under $10,000, and made payments on Epps condominium in Biloxi, Mississippi.


Donald Alway, special agent in charge of the Jackson FBI office, speaking about the Epps indictment stated during a press conference, “the investigation of corruption by public officials is extremely difficult due to its sensitive nature.  The FBI's role as a criminal investigative agency places public corruption as its number one priority in criminal enforcement. Public corruption is often the result of whispered conversations sealed with handshake deals, so therefore its very hard to prove.”  Agent Alway encouraged people with knowledge of public corruption to step forward with information.


While Epps and McCrory received almost a million dollars a piece from this contract scheme, the real benefactors are large private prison management groups such as Management Training Corporation (MTC) who received almost a billion dollars in benefits from these contracts. In a statement released to the media, Management Training Corporation (MTC) stated, “We deeply regret that in this case we didn't have any idea that improprieties may have taken place, especially in light of the significant allegations in the indictment.”


Mississippi State Auditor Stacey Pickering said, “It is a very sad day in Mississippi when two men with a history of public service are charged with blatantly committing crimes to increase their personal fortunes.  They are accused of deliberately violating public trust while serving in positions of leadership.”
Resources:
Copy of the Christopher Epps / Cecil McCrory Federal Indictment
Copy of FBI Press Release
US Justice Department Press Briefing
FULL STATEMENT FROM MTC:

We're saddened, surprised and disappointed by the allegations against former Commissioner Chris Epps. MTC was hired in 2012 to operate three prisons for the state after a competitive procurement process where multiple companies were invited to tour facilities and submit bids. MTC was brought in with the primary objective of improving the overall operations of these facilities. In 2013, we submitted a proposal to operate a fourth prison for the state during an open and competitive procurement (RFP 13-005) with the same mission.

MTC worked very closely with Mr. Epps over the last two years in implementing changes to these facilities that would improve security and the treatment of offenders. He was very involved in the management of our four contracts. He knew of the challenges we faced and was working closely with us to overcome them. In partnership with the state and with their support, MTC has made significant improvements at all four facilities and continues to make great strides.

Soon after being awarded the contracts in 2012, Mr. Epps recommended MTC work with Cecil McCrory to provide services within the state of Mississippi. Mr. Epps also made us aware of the fee McCrory had charged in the past to other contractors. MTC hired Mr. McCrory as a consultant because of his many years of experience working in the state. Mr. McCrory had been working with the previous prison contractor and other vendors so MTC felt his services would be beneficial given his knowledge and experience. MTC paid Mr. McCrory $12,000 per month for his work, after Mr. Epps told us that is what others had been paying him. MTC hires consultants in every state where we provide services to the state. Mr. McCrory's services included working with counties to explore possible business opportunities, coordinating with local and state officials to strengthen MTC's relationship within the state, and networking at various industry conferences. He worked at length to investigate a potential bid for a federal corrections contract in Mississippi. At no time did Mr. Epps instruct or mandate MTC to hire Mr. McCrory. In light of the indictment, MTC cancelled its contract with Mr. McCrory last week.

Each month, MTC received an invoice from Mr. McCrory and paid it in full just as we would any other invoice. MTC was not aware of any alleged inappropriate relationships between Mr. Epps and Mr. McCrory or that Mr. Epps was allegedly a participant in any way in the contract with McCrory.

We fully support the government's investigation to learn what happened and to take appropriate action. We also believe the state of Mississippi made the right decision in reviewing all current corrections contracts including suspending the procurement process for the four private prison contracts which we hold. The integrity of contracting is of paramount importance to the state as well as to MTC. All MTC employees are required to take ethics training and are held to the highest standards of ethical conduct. We deeply regret that in this case we didn't have any idea that improprieties may have taken place, especially in light of the significant allegations in the indictment.