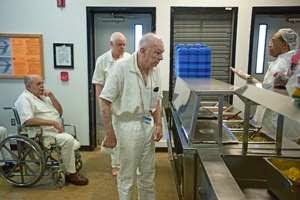 
Lubbock, Texas  - Today the Lubbock Avalanche News released a report showing a high number of in custody deaths in Lubbock County and at the Texas Department of Criminal Justice's Montford Unit.
According to the news report, the Texas Department of Criminal Justice (TDCJ) had over 61 inmate deaths between 2005 and October 2014 in Lubbock County alone.  The Montford Unit is the only TDCJ prison facility located in Lubbock County and is a psychiatric treatment facility for TDCJ inmates.
Since 2005 the Texas Department of Criminal Justice had over 1,821 in custody deaths according to a report from the Texas Attorney Generals Office.  For a complete listing of all TDCJ inmate deaths from January 1, 2005 to October 14, 2014 CLICK HERE.
According to the Lubbock Avalanche News more than 3,700 inmates died in Texas jails and prisons since 2005.  There are growing concerns about proper prison funding and training of staff when it comes to caring for the mentally disabled.  AFSCME Texas Correctional Employees is pushing for increased pre-service training of correctional staff to include over 40 hours of mental health training.

Currently Texas correctional officers receive 200 hours of pre-service training and only 1 hour 45 minutes of that training is for managing the mentally disabled.  In 2012 the Texas Department of Criminal Justice had over 36 reported suicides according to a report from TDCJ's Emergency Action Center.

With the current mental health trends and the agency lacking proper mental health training, Federal litigation is expected to be brought against the Texas Department of Criminal Justice.

Gatesville - A Texas Department of Criminal Justice (TDCJ) van caught fire today around 1:30 PM at the Hilltop prison unit in Gatesville.  A passerby captured the incident on video.  At the time of the fire, no inmates were on board the vehicle.  No injuries are being reported at this time.  The van was a total loss as flames quickly spread throughout the vehicle.
With an aging vehicle fleet, the State of Texas continues to prolong the replacement of equipment and facilities, even though its more costly to maintain in the long run.  State budget writers mostly plan for two year budgets where the least amount of money is spent, even though replacement of aging vehicles would be more cost efficient for taxpayers in the long run.
Currently the Texas Department of Criminal Justice vehicle fleet consist of approximately 2,200 vehicles.  The vehicle replacement budget requested for the 2016-2017 fiscal year was reduced to $6,906,785 from $11,040,894 in 2014.  (See Legislative Appropriation Request LAR 2016-2017)

This replacement criteria is hardly ever used and state employees are subjected to driving dangerous vehicles that have hundreds of thousands of miles on them.


A Texas parole commissioner has been indicted for tampering with a government record after at least five inmates were denied release from prison because she wrote in their files they had refused to be interviewed.
Pamela D. Freeman, one of 14 Texas Board of Pardons and Paroles commissioners who interview inmates being considered for release, was indicted on the single count in Huntsville on Wednesday. If convicted, she could face up to 10 years in prison and a $10,000 fine.
"Based on the investigation and the subsequent indictment, Ms. Freeman will not be allowed to return to work at this time," Raymond Estrada, spokesman for the board said in a statement. "Her continued employment will be determined in accordance with established policies, procedures and/or the resulting disposition of the charge."
The case began last June when San Antonio lawyer Kevin Stouwie complained to state Sen. John Whitmire, chair of the Senate Criminal Justice Committee, and Texas Department of Criminal Justice Inspector General Bruce Toney.
"It always concerns you that you have people entrusted with such huge responsibilities allegedly violating the trust and responsibilites to do the right thing," Whitmire said. "We have zero tolerance if we know about it."
A copy of Stouwie's complaint, obtained by The Texas Tribune, stated that on April 30, at least five inmates on the Wynne Unit in Huntsville were called into an area to be interviewed by Freeman.
The inmates and other prison workers saw Freeman at the prison that day, but said she did not interview any of the five. The men's files included Freeman's remarks that they had refused to be interviewed by her. All five were denied parole.
Contacted late Friday, Stouwie said he found out about the incident from the inmates' attorneys and is considering representing them in a civil action against the parole board.
"It's not clear to me whether they are going to reconsider those cases," said Kevin Stouwie. "They may and if they do, that could have a bearing of what happens."
Pardons and Parole Board Chair Rissie Owens said in a statement that the incident does not reflect the actions of the rest of the board's employees.
"While this incident is unfortunate and certainly impermissible if true, it is by no means representative of our agency, which is comprised of dedicated, honorable and hard-working staff who take pride in the work they do to represent the board,” Owens said.
This investigation is not the first time attorneys have complained about Freeman's actions, according to Bill Habern, a lawyer in Huntsville who handles parole cases and who filed a grievance against her with the board a year ago.
"She's had a long and troubled history with lawyers who do parole work," he said. "Most board members I deal with, including those on the current board, seem to be sincere, dedicated people who try to do the right thing."
Freeman was charged with interviewing inmates who who had served at least 20 years of their sentences and had never been interviewed by a parole commissioner. She was one of two commissioners based in Huntsville and has been in that post since 2004.
A call to her home for comment on the indictment was not immediately returned.

This article originally appeared in The Texas Tribune at http://www.texastribune.org/2014/10/03/parole-commissioner-indicted-falsifying-inmate-rec/.
Posted by Texas Prisons at 7:48:00 AM 1 comment: