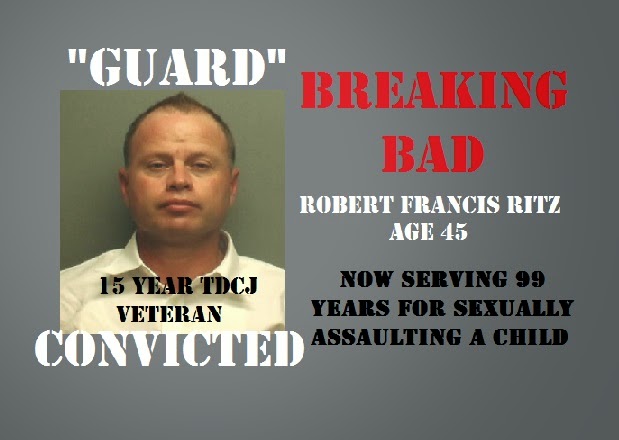 HAYS COUNTY -- A 44-year-old 15 year veteran of Texas Department of Criminal Justice and prison "guard" was sentenced to the rest of his life in prison after a Hays County jury convicted him of trafficking charges after he was arrested for allegedly sexually assaulting a 13-year-old girl.

According to the Hays County District Attorney’s Office, Robert Ritz was arrested in January 2013 after he met the young girl on a social networking site called 'Badoo.'

According to a press release, Ritz is alleged to have sexually assaulted the 13 year old female child in front of another 12 year old child.  Ritz continued to have sexual relationships with her even after he became aware police were investigating him.

Due to Ritz picking the child up from her home and transporting her over county lines from Hayes County to Travis County, this allowed prosecutors to charge him with the state's new sex trafficking charge, which carries a life sentence.  Without this charge, Ritz could have served as little as five years in prison.  Now he faces life without the possibility of parole.

Even after being arrested, Ritz continued to write the victim a letter encouraging their relationship.  Ritz will now be unable to contact the 13 year old with his new home now going to be the Texas Department of Criminal Justice, a place Ritz should be familiar with.
Posted by Texas Prisons at 12:23:00 PM